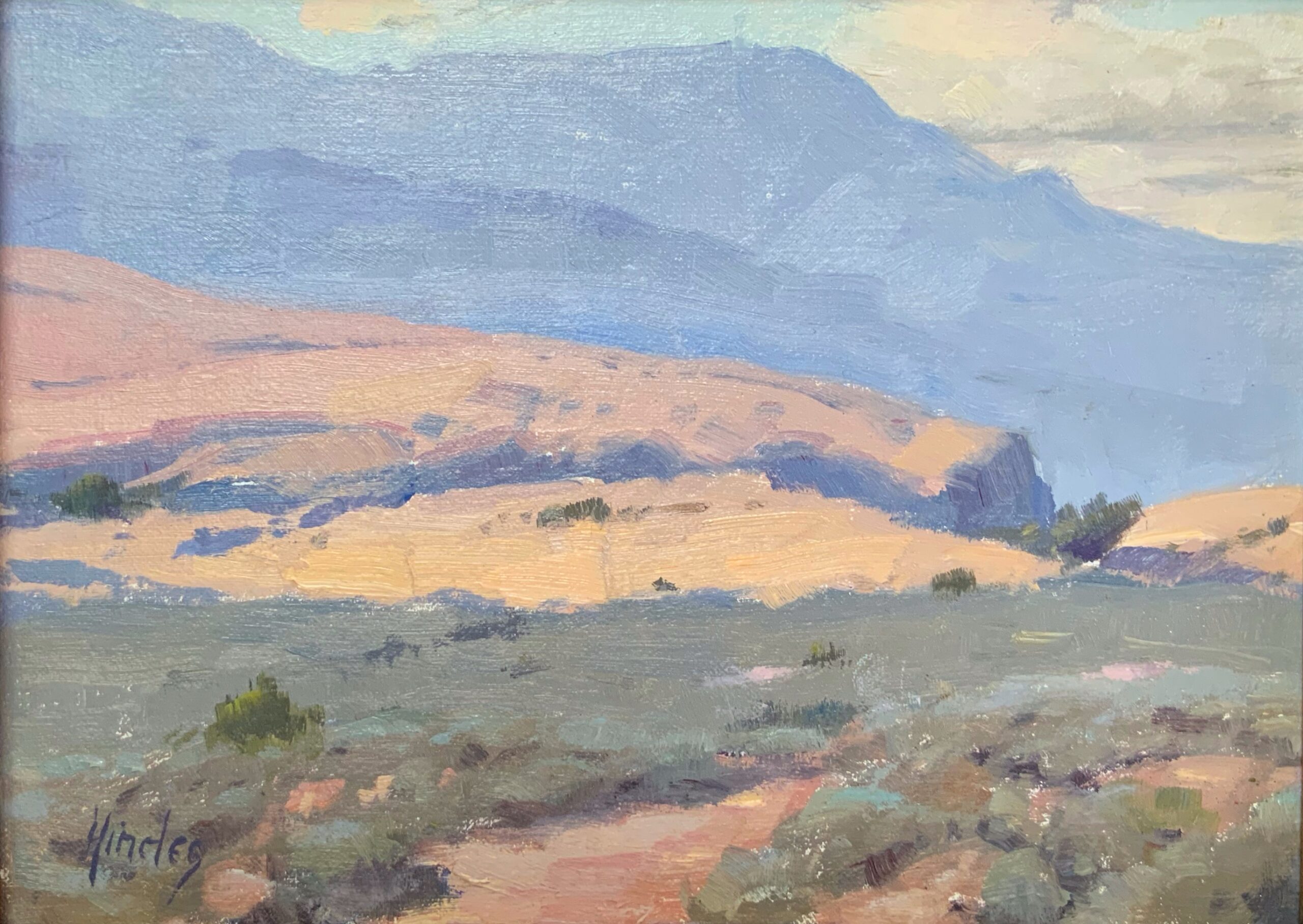 “Desert Seams” by artist Janice Yow Hindes, is a traditional landscape painting, featuring an exceptional quality of light, atmosphere, and space in a small “on-the-spotter” from Moab, Utah, at the Arches National Park.  Arches National Park lies north of Moab in the state of Utah. Bordered by the Colorado River in the southeast, it’s known as the site of more than 2,000 natural sandstone arches, such as the massive, red-hued Delicate Arch in the east. Long, thin Landscape Arch stands in Devils Garden to the north. Other geological formations include Balanced Rock, towering over the desert landscape in the middle of the park. The painting’s warm and cool colors permeate the barren desert landscape as the grass and broken rocky ledges make for a compelling entrance with their contrasting features.  The unusual composition creates a series of cascading stripes that draw the viewer’s eyes into the hazy distance beckoning onlookers to journey into the landscape where the focus of the painting lies dangerously close to the edge.

The natural colors of this hard land of mountains and desert illustrate the sparse foliage and barren rocky surface that is a part of the American West. The location where this painting was created was home to countless Native Americans, wandering pioneers, and cowboys, all of them the stuff of legends.

Before there was a Scottsdale Art School, the Hindes Art School was opened in Hindes, Texas by owner and instructor, Janice Yow Hindes. Shortly after opening she won the Coppini Adult Scholarship. Later came the Purchase Prize from the Scottsdale Art School. Hindes then exhibited at the Cowboy Artist of America Museum, sold out at the Gilcrease Museum Miniature Show, won Best of Show Regional OPA and became an OPA Signature Member. A&M University incorporated one of her portraits of benefactor Clifford Wendler at the dedication of the Wendler Wing of the Library. This past member of the Western Academy of Women Artists won the Little Jewel Plein Aire Award in Tuscon. As Coppini Artist of the Year, she also served as their president. Hindes was accepted into the National Association of Professional Plein Aire Painters and exhibited at the NYC National Arts Club. She was also a winner in the first Annual Ray Mar Contest.